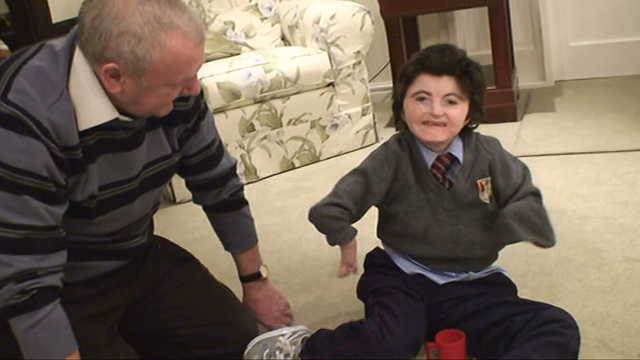 In this clip you will see Ursula, a child with Cornelia de Lange syndrome, enjoying interacting with her father.

latest news
Key Fact
The level of social enjoyment and motivation will depend on the individual with Cornelia de Lange syndrome.

Researchers at the University of Birmingham have found many individuals with Cornelia de Lange syndrome have some difficulties understanding and using the ’tools’ for social interaction.

These ’tools’ include the use of eye contact, facial expression, following another’s gaze and other non-verbal skills including showing, pointing, giving and gesturing.

In this video you will see Tamsin and Jo interacting.  Jo takes the lead in this interaction.

Social interaction skills may be limited, however, many children do enjoy engaging with other people.  At the top of this page you can see Ursula interacting with her father.  However, it is important to remember that this might occur only in particular situations or settings and may be largely on the individual’s own terms.  Individuals may rely heavily on others to structure the interaction.

Some of the children that were observed in the research project at the University of Birmingham showed enjoyment of basic social play (peek-a-boo and tickling games).

Other children and adults actively avoid social interaction with others, moving away from the adult, pushing them away or turning their head or face away from them.

Other children and adults that we observed appeared to enjoy engaging with others but showed signs of feeling uncomfortable, anxious and self-conscious during interaction with unfamiliar people.  These characteristics may reflect the presence of social anxiety in some individuals.

The only group of individuals who scored below those with Cornelia de Lange syndrome on this measure of sociability were those with autism spectrum disorder, for which impairments in social interaction and social motivation are core diagnostic criteria.