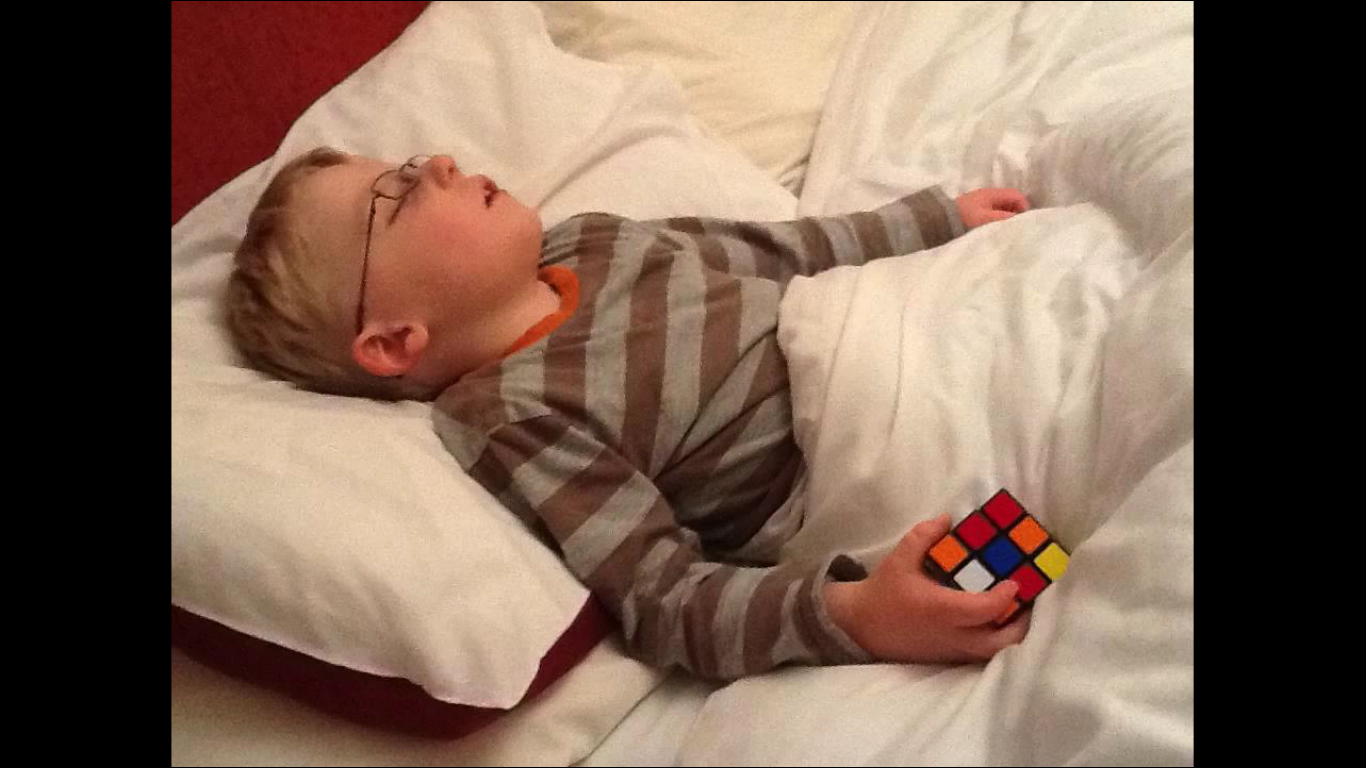 How common is sleep disturbance in Smith-Magenis syndrome?

Almost all children and adults with Smith-Magenis syndrome have sleep difficulties.

Greenberg and colleagues found that around 8 out of 10 people with Smith-Magenis syndrome experienced sleep difficulties which included difficulties settling down to sleep, waking up in the night, early waking and daytime sleepiness.  Other research that has relied on parental report has suggested higher rates of 9 out of 10 individuals experiencing sleep disturbance.

How is sleep disturbance measured?

Sleep disturbance has been measured in Smith-Magenis syndrome using a technique called ‘polysomnography’.  Polysomnography is a way of recording a person’s body functions as they sleep.  Brain waves, heart rate, levels of oxygen in blood, breathing, eye-movements and leg movements are recorded.

What does sleep disturbance in Smith-Magenis syndrome look like?

Infancy:  Reduced 24 hour sleep is reported despite parental beliefs that their children are good sleepers.

Older children, adolescents and adults: Activity appears to be elevated early in the night suggesting it is difficult for children to get to sleep.  Increased age has been linked to reduced night-time sleep but increased shorter naps.

Despite reduction in sleep quality with age, parents and carers have reported decreases in sleep problems as individuals with Smith-Magenis syndrome get older.  This may be because of reduced disruptive night-time behaviour rather than improved sleep.

What are the causes of sleep difficulties in Smith-Magenis syndrome?

Sleep difficulties have been linked to an inverted melatonin release pattern which disrupts the sleep-wake cycle.  This leads to too much melatonin being released during the day and not enough at night. Melatonin is a hormone that occurs in the body that regulates sleep-wake patterns.

It is hypothesised that this is underpinned by problems with the regulatory function of the pineal gland in the brain.

This is the opposite pattern to the majority of people and leads to day-time sleepiness and night-time waking.

Another potential cause of sleep difficulties in Smith-Magenis syndrome is midface hypoplasia.  Midface hypoplasia (the slower development of the centre of the face) causes obstructive sleep apnoea (when normal breathing is interrupted by a blockage of air flow) which consequently may affect the individual's sleep quality.   This possibility needs to be excluded as a cause of sleep problems especially in young children, and can be treated with an adenoidectomy (removal of small lumps of tissue at the back of the nose).

What is the relationship between challenging behaviour and sleep?

Daytime sleepiness may account for some of the difficult behaviours engaged in by people with Smith-Magenis syndrome.  This is supported by research that has found a link between temper outbursts and increased melatonin in the body.

Some behavioural problems associated with Smith-Magenis syndrome (e.g. hyperactivity, attention deficit and challenging behaviour) may be underpinned by fatigue.

How can sleep difficulties be managed?

Medication that provides melatonin in the evening in combination with medication that suppresses daytime release has been linked to improvements in sleeping of children with genetic disorders generally.

There is some evidence that even severe sleep problems in Smith-Magenis syndrome can be improved with melatonin; however, the evidence from research studies is inconsistent.

A series of studies indicated that the combination of acebutolol (a beta-blocker) and melatonin led to an improvement in sleep behaviours in children with Smith-Magenis syndrome (increased total sleep time, reduced early morning waking).  Reduced hyperactivity and improved cognitive performance were reported.  Despite this, in 2003 Professor Jeremy Turk argued that the results of this study were unclear because, other than reported reductions in temper-outbursts, the specific outcome measure for behavioural improvements in this study was not reported.  In addition, research also suggests that while sleep aides (of which melatonin is the most frequently used) were most common in medication used and the earliest treatment to be started, their use did not affect caregiver ratings of disruptive behavioural outcomes.

For more information on the nature of sleep in children with intellectual disability, and what can be done to reduce or improve sleep problems, click here to read Cerebra’s guide.

For useful tips on how to address some of the sleep disturbances common in Smith-Magenis syndrome click here.

If you want help and advice on sleep issues in Smith-Magenis syndrome click here.